Clairvoyant carries vast experience in Big data and Cloud technologies. We explore the core concepts of Apache Kafka and other big data technologies to provide the best-optimized solutions to our clients. In light of the recent performance enhancements, we have utilized the fundamental configurations in Apache Kafka producer to achieve a more optimized Kafka producer to ensure efficient execution.

In this blog, we deep-dive into Kafka producer’s architecture, its components, and configurations to help you understand the concept of Idempotent producer. We also discuss the notion of a safe producer and how it helps improve the performance of Kafka producer.

Let’s start by learning about the internal architectures of the Kafka producer and the various components involved in sending/delivering the messages to the Kafka broker (topic -partition). 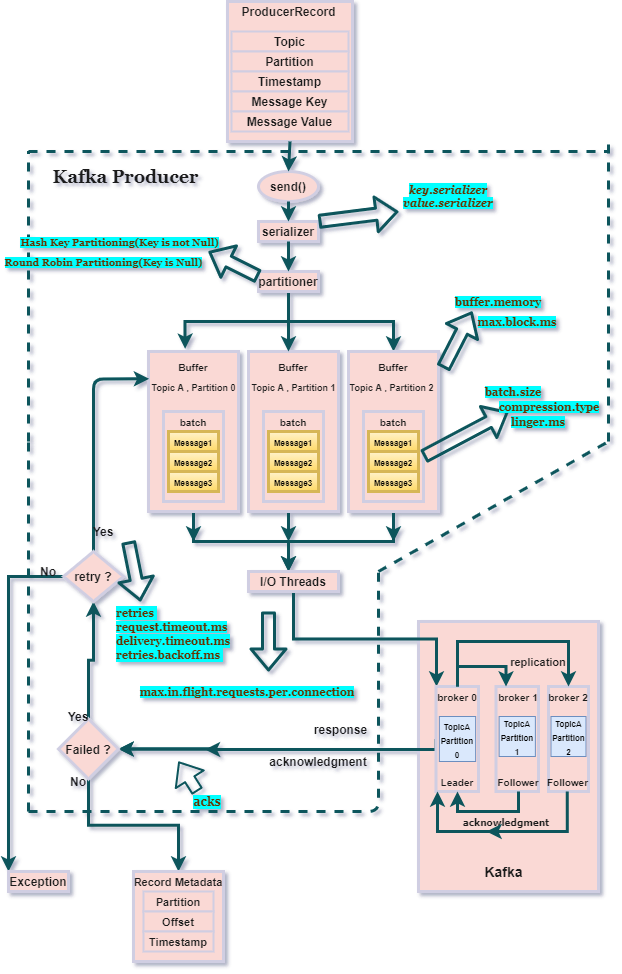 Serializer- It helps serialize the key and the value objects that the user provides with their ProducerRecord into bytes.

Partitioner- Partition assignment to every ProducerRecord is done by the Partitioner. There are two types of partitioning strategies-

Buffer- A memory buffer of the unsent records is maintained by the producer for each partition. The size of the buffer can be set by the batch.size config.

I/O Threads- The background I/O thread is responsible for turning the records in the buffer into requests and transmitting them to the Kafka broker.

Let’s understand how these components work together

The process of sending messages to Kafka brokers starts with creating a ProducerRecord which has the topic-name and the message-value. Message-key and/or a partition can also be mentioned in the ProducerRecord. ProducerRecord is then sent using send().

Once a partition is determined, the producer adds the message-value to a batch of records that will be sent to the same topic and partition. This batch of unsent records is maintained in the buffer-memory. Once the message arrives at the buffer memory, the send() returns and starts processing the next ProducerRecord.

A separate I/O thread is responsible for sending those batches of records as a request to the Kafka broker. When the broker successfully receives the messages, it will return a RecordMetadata object as response and it has the topic, partition, and offset of the record within the partition.

If the message fails to be received by the broker, it will return an error as a response, and the producer may retry sending the message a few more times (No. of retries) before giving up and returning the error.

Let’s analyze some of the important producer configurations

Acks — The number of acknowledgments the producer requires the leader to have received before considering a request complete. The following settings are allowed:

default : none (i.e. no compression).

As compression is for the full batch of data (multiple records being sent to the same partition), the efficiency of batching will also impact the compression ratio (more batching = better compression).

Reason for choosing the compression can be as follows —

1) It will reduce the disk footprint and use a lesser amount of disk space.

2) It will also reduce the request size which will lead to reduction in latency.

All these configurations can really help us tune the behavior of the Kafka producer to a good extent based upon our use-case requirements.

Let’s try to understand what an Idempotent producer is and what problems it solves.

This scenario depicts the need for Idempotency

To make the Kafka producer idempotent, we just need to enable this configuration-

Lets try to understand how it achieves idempotency

Idempotency for a message

For a particular session, the Kafka leader broker assigns a producer id(PID) to each producer. Also, the producer assigns a monotonically increasing sequence number (SqNo) to each message before sending it. The Kafka broker keeps track of the largest PID-SqNo combination on a per partition basis. When a lower sequence number is received, it is discarded and that’s how it avoids duplicate messages.

The configuration acks = all and retries = Integer.MAX_VALUE helps to achieve the ‘at-least-once-delivery’ of the message. Hence, that’s how an idempotent producer works and achieves the ‘exactly-once’ delivery of the message.

Note- 1) Idempotent producer can not deduplicate the application level re-sends of duplicate messages.

2) It can guarantee the ‘exactly-once’ delivery only for the messages sent within a single session.

For a producer to be called safe, the following factors can be taken into consideration-

We can set the below producer and broker/topic configurations in order to make our producer safe:

The above mentioned configurations for safe producer are for the ideal scenarios; where we are not considering real world scenarios which may impact the overall performance like in the below situations-

2) Leader broker goes down along with the follower broker (No replicas to get served to the consumer).

4) Latencies due to network bandwidth and/or request sending/ processing speed of the servers, etc.

We learned the various producer configurations and their impacts on the behavior of Kafka Producer. We also discussed Idempotent and safe producer which helps improve the performance of the Kafka producer.

We hope this blog will help you make better decisions while configuring the Kafka producer. Learn how to manage Apache Kafka pragmatically with our blog here.

To get the best data engineering solutions, reach out to us at Clairvoyant.

Thank you for reading till the end. Hope you enjoyed it!