Setting up an Apache Airflow Cluster

In one of our previous blog posts, we described the process you should take when Installing and Configuring Apache Airflow. In this post, we will describe how to setup an Apache Airflow Cluster to run across multiple nodes. This will provide you with more computing power and higher availability for your Apache Airflow instance.

A running instance of Airflow has a number of Daemons that work together to provide the full functionality of Airflow. The daemons include the Web Server, Scheduler, Worker, Kerberos Ticket Renewer, Flower and others. Below are the primary ones you will need to have running for a production quality Apache Airflow Cluster.

Web Server
A daemon which accepts HTTP requests and allows you to interact with Airflow via a Python Flask Web Application. It provides the ability to pause, unpause DAGs, manually trigger DAGs, view running DAGs, restart failed DAGs and much more.

The Web Server Daemon starts up gunicorn workers to handle requests in parallel. You can scale up the number of gunicorn workers on a single machine to handle more load by updating the ‘workers’ configuration in the {AIRFLOW_HOME}/airflow.cfg file.

Scheduler
A daemon which periodically polls to determine if any registered DAG and/or Task Instances needs to triggered based off its schedule.

Executors/Workers
A daemon that handles starting up and managing 1 to many CeleryD processes to execute the desired tasks of a particular DAG.

This daemon only needs to be running when you set the ‘executor ‘ config in the {AIRFLOW_HOME}/airflow.cfg file to ‘CeleryExecutor’. It is recommended to do so for Production.

How do the Daemons work together?

One thing to note about the Airflow Daemons is that they don’t register with each other or even need to know about each other. Each of them handle their own assigned task and when all of them are running, everything works as you would expect.

A simple instance of Apache Airflow involves putting all the services on a single node like the bellow diagram depicts.

A more formal setup for Apache Airflow is to distribute the daemons across multiple machines as a cluster. 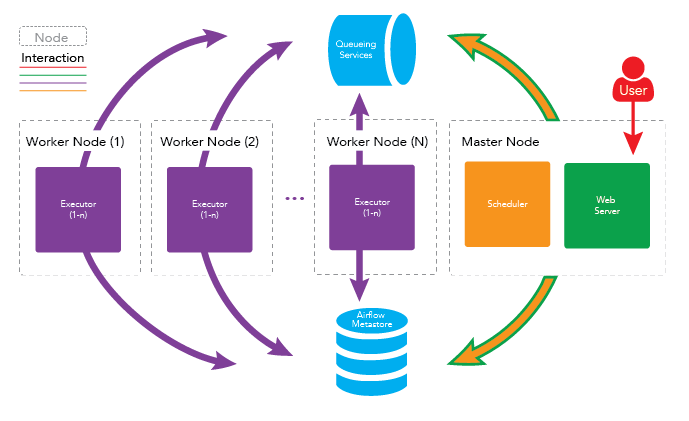 Higher Availability
If one of the worker nodes were to go down or be purposely taken offline, the cluster would still be operational and tasks would still be executed.
Distributed Processing
If you have a workflow with several memory intensive tasks, then the tasks will be better distributed to allow for higher utilization of data across the cluster and provide faster execution of the tasks.

Horizontally
You can scale the cluster horizontally and distribute the processing by adding more executor nodes to the cluster and allowing those new nodes to take load off the existing nodes. Since workers don’t need to register with any central authority to start processing tasks, the machine can be turned on and off without any downtime to the cluster.
Vertically
You can scale the cluster vertically by increasing the number of celeryd daemons running on each node. This can be done by increasing the value in the ‘celeryd_concurrency’ config in the {AIRFLOW_HOME}/airflow.cfg file.

You may need to increase the size of the instances in order to support a larger number of celeryd processes. This will depend on the memory and cpu intensity of the tasks you’re running on the cluster.

You can also add more Master Nodes to your cluster to scale out the services that are running on the Master Nodes. This will mainly allow you to scale out the Web Server Daemon incase there are too many HTTP requests coming for one machine to handle or if you want to provide Higher Availability for that service.

One thing to note is that there can only be one Scheduler instance running at a time. If you have multiple Schedulers running, there is a possibility that multiple instances of a single task will be scheduled. This could cause some major problems with your Workflow and cause duplicate data to show up in the final table if you were running some sort of ETL process.

If you would like, the Scheduler daemon may also be setup to run on its own dedicated Master Node. 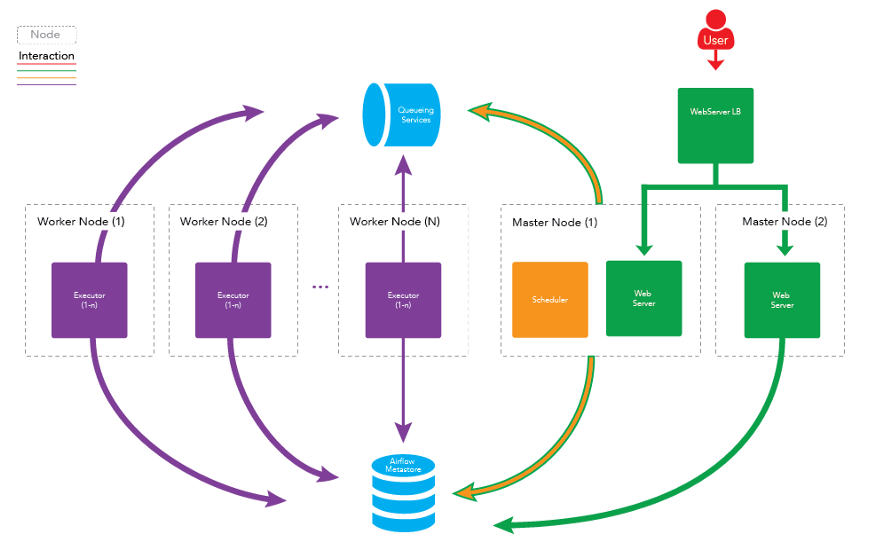 1.Install Apache Airflow on ALL machines that will have a role in the Airflow

2.Apply Airflow Configuration changes to all ALL machines. Apply changes to the {AIRFLOW_HOME}/airflow.cfg file.

3.Deploy your DAGs/Workflows on master1 and master2 (and any future master nodes you might add)

4.On master1, initialize the Airflow Database (if not already done after updating the sql_alchemy_conn configuration)

5.On master1, startup the required role(s)

6.On master2, startup the required role(s)

7.On worker1 and worker2, startup the required role(s)

8.Create a Load Balancer to balance requests going to the Web Servers

To get the best data engineering solutions for your business, reach out to us at Clairvoyant.