What is the Internet of Things and How Does it Work?

Big Data is quickly becoming the next big asset for many organizations. It would not be surprising for organizations to begin selling data of all types, including the metrics, knowledge, and insights gained from the data accumulated and analyzed. Riding on this wave of Big Data is Internet of Things (IoT).

Technology, along with low storage costs, is making it easy for organizations to process large amounts of data; as a result, a new trend is emerging known as “capture it all.” Capture it all means collecting as much data about your customers’ product usage and behaviors as possible because the data collected may be useful in the future. At a time when organizations are seeing the benefits of Big Data, IoT provides innovative ways of capturing data that can enhance these benefits.

Internet of Things is the concept that things (animals, people or objects) with a unique identifier can automatically transfer data over a network without human interaction. There are a number of devices that can be connected to the Internet to create a network of ‘things’ that communicate with each other to make intelligent decisions. This is nothing new; the concept of Ubiquitous computing and sensor networks has been in use for a long time.

Why the Buzz Now?

Four technology trends are fueling the IoT revolution and renewing interest, they include:

How Internet of Things Is Used Today

Internet of Things deployments implemented right have the potential to become Big Data’s killer Application. Refer to figure 1 for the architecture used for typical IoT deployments. 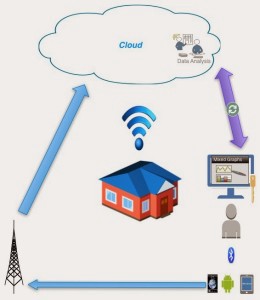 Sensors that allow sensing of events are delivered to the mother ship on the cloud via servers connected to the Internet. Data from these sensors is communicated via BLE and temporarily stored on the smartphone. The use cases and potential for IoT and Big Data is endless as well as incredible.

A number of products based on IoT are getting launched and also receiving overwhelming response and adoption. Wearable devices like Fitbit, Basis, Smartwatch from Samsung, and Qualcomm are playing an increasing part in IoT awareness. Google became an early adaptor of IoT with its’ acquisition of the Nest Labs — Smart Thermostat. Also, Google is gradually getting into home automation with their set-top boxes, NEST, Google Fiber, and Smart watches powered by Android OS. Currently devices like Fitbit continuously and discreetly capture activity levels and sleep quality and then transmit the data to cloud using the smart phone. The sensors in turn communicate the data to smartphone through BLE. Just imagine if there is a way to start tracking blood pressure, anxiety levels, stress levels, and heart rate in a similar discreet manner. We can have personal data that is collected about ones self and then used by physicians in predicting a change in daily routine that can be causing current health issues. For example, if a patient is unable to sleep properly, having the data collected historically could be invaluable in predicting what could have caused the current problem. Tools like GOOGLE Nest Smart thermostat, Smart Smoke and CO alarm constantly track or monitor the environment in the house including information about lighting, humidity, daily behavior of the home’s residents, temperature, and air quality. Smartphone apps like Easily Do also discreetly record day to day activities of the owner by simply keeping track of the GPS on the cell phone.

Potential Uses for Internet of Things

Imagine a world where devices can talk to each other, communicate and exchange information, and make intelligent decisions based on the data collected. For example, if you are coming home from a workout and, based on the data from your Fitbit and Easily Do, information is communicated to Google Nest thermostat that you would be home in a few minutes. This information can be used to make your house more comfortable and cooler upon your arrival. Taking this example a little further. What if data is captured from many people and made available to researchers (After anonymizing of Personal Identification Information). This captured data can provide researchers and scientists with valuable data to study and find correlations between activities/actions that cause people to be susceptible to diseases. This data can then provide feedback to users who may be susceptible to a disease and allow preventive measures to begin. In addition, trends/patterns may be identified that enable researchers to identify the reasons for diseases like heart attacks and Parkinson’s. In addition, many of us may have seen sci-fi movies where an Artificial Intelligence system talks back and gives advice by analyzing a situation. Those days may not be far off due to the way technology trends in regards to IoT, Cloud computing, and Big Data are coming together.

Gartner predicts that Internet of Things will affect every industry. As a result, finding top analytics talent qualified to manage massive amounts of data will be difficult in the years ahead. A yearlong research project conducted by Accenture shows that the United States is projected to create nearly 39,000 new jobs for analytics experts through 2015. Only 23 percent if these jobs will be filled by qualified candidates. Cisco’s CEO, John Chambers, predicts that during the next decade the impact of Internet of Things will be 5 to 10 times greater than the Internet was on society and believes that IoT opens up a $19 Trillion opportunity during the same period.

IoT is here to stay and will make Big Data even bigger. Our challenge, as IT professionals, is to discover innovative ways to use this technology that will enhance the general population’s lifestyle as well as benefit companies bottom line.