How to Build Custom Service Descriptor

A Custom Service Descriptor (CSD) is one of the easiest ways to add a service within the Cloudera Manager. The ability to create your own CSD’s opens up many opportunities for organizations to utilize Cloudera Manager more effectively. Let’s discuss CSDs in more detail and understand how to build a CSD for third-party services using the Airflow CSD as an example.

What is a Custom Service Descriptor?

A CSD is a file that contains all the configurations needed to describe and manage a new service in Cloudera Manager. A CSD is a very useful tool for a Hadoop cluster administrator.

Structure of a CSD

A CSD is linked to one service type in Cloudera Manager, packaged and distributed as a jar file. It contains three folders: description (which is required), image, and scripts. You can learn more here.

Images contain an icon used by Cloudera Manager to represent the service.

Script is a directory that contains all the control scripts that are necessary to perform any role-specific and service-specific commands. For example, stop_airflow_webserver.sh is used by the webserver role to stop the Airflow Webserver from running on a host.

Roles in a Service

Each service in Cloudera Manager has a set of Daemons or Processes assigned to a host machine in the cluster. Knowing about the daemons that will be part of a service is crucial in building a CSD.In Airflow, the Daemons that make it up are the Webserver, Scheduler, Worker, Flower, and Airflow Kerberos. All of these are collectively referred to as the roles in the Airflow service. Out of these roles, the Webserver, Scheduler, and Worker roles are required for the smooth and successful running of an Airflow cluster. You can learn more here.

Both services and roles may have commands and configuration parameters assigned to them. Service command is typically a command that affects every role within a service instance. For example, in the Airflow CSD, initializing the database is a command that will affect every role in Airflow. All the roles require a service configuration parameter. For example, db_hostname, db_hostname, broker_url, executor_type, etc., are required to create the airflow configuration file to connect and initialize the database successfully.

Specific role commands and parameters only pertain to a single role within the service. For example, in the Airflow CSD, it makes sense for the Webserver role to be initialized using start_airflow_webserver.sh. Similarly, every role’s parameter will be specified as required by the particular role. 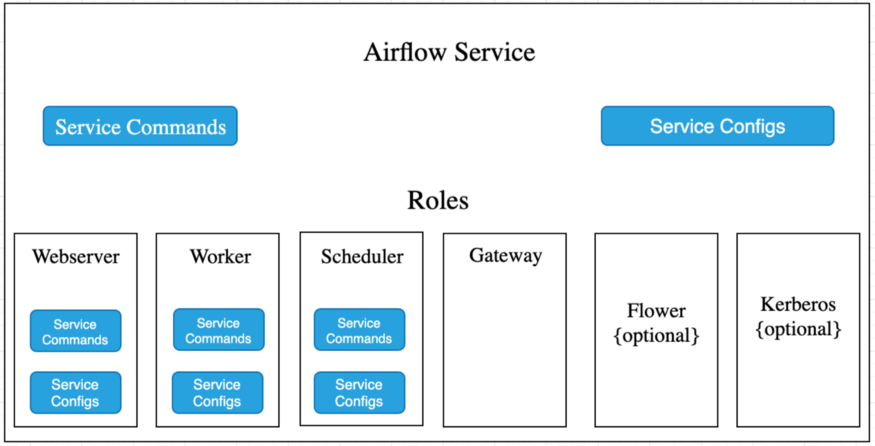 Roles implemented in the AIRFLOW CSD

Webserver, Scheduler, and Worker are the required roles in the Airflow service. Parameters specified in the CSD include a script-runner attribute to execute the start script of every role, stop-runner to execute the stop script of every role, respectively, and set environment variables for smooth execution of the script. Roles also have commands specified in the CSD, a script that gets executed on the host.

To learn more about the parameters of the above roles please refer to service.sdl.

The service.sdl file can be validated with the validator.jar file. To run a validation, run:

After creating all the necessary files and scripts, you’re ready to build your CSD Jar. To build the CSD, you can run the following command inside the CSD Definition directory:

Steps to deploying a CSD

To get the best data engineering solutions for your business, reach out to us at Clairvoyant.