Nowadays, everyone’s leaning towards the cloud. Everybody wants services and applications to be hosted on a cloud platform to save a lot of costs for on-prem servers, feasibility, security, availability, scalability, etc. Different cloud computing service providers like Amazon, Google, Heroku, etc. But, in this blog, we will focus on Amazon Web Services (AWS).

AWS provides a vast range of services/tools, such as:

AWS provides a Free Tier to its newly registered customers for one year from the date of account creation. This provides customers the ability to explore and try out different AWS services free of charge up to the specified limits. You can find more details can be found on the AWS Free Tier.

Based on my experience and learning, I have penned down, in this blog, these steps for anyone looking to deploy docker images/containers on AWS ECS.

What Is AWS ECS?

Following are the different terminologies in ECS that we’ll go through one by one in the following sections:

Docker is an open platform that simplifies developing, building, managing, and running applications in an isolated environment called a container. It provides us the ability to manage our infrastructure in the same ways that we manage our applications. We can reduce the delay between writing the code and running it by taking advantage of its shipping, testing, and deploying the code quickly.

We can use Docker for:

Now we’re all set to dive directly into the steps, from creating a docker image to pushing it to AWS ECR and finally deploying to AWS ECS.

Amazon Elastic Container Registry (Amazon ECR) is a fully managed container registry that makes it easy to store, manage, and deploy Docker container images. It provides an ability to save configurations that help us quickly move our images from Development to the Production environment reducing overall workloads.

The following are the steps to create a repository in AWS ECR: 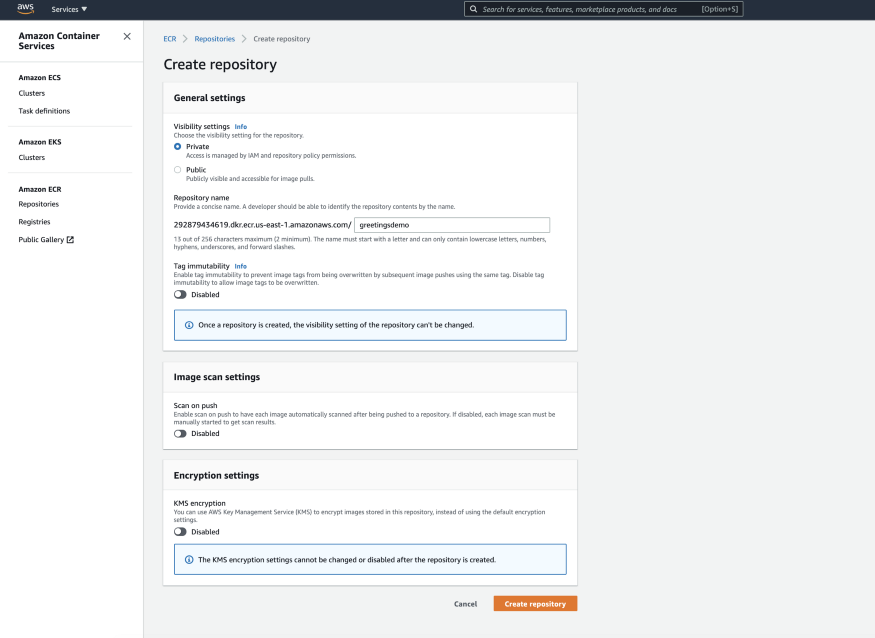 2. The repository has been successfully created

And we’re done. It’s that simple to create a repository!

Step-2: Creating a docker image and pushing it to the newly created repository

Assuming you have already created/updated an application using/to the latest version of SpringBoot. If not, then don’t worry. I’ve created the sample application - SpringBoot-Docker-ECS-Example.

We’ve successfully created a docker image. Now let’s authenticate ourselves, tag the image, and push it to the repository.

The first command will retrieve an auth token which will be used to authenticate our docker client and allow it to push the images to the ECR repository. Once it’s done, we have to tag our image (or build if it’s not already done). A Docker tag is an alias to the ID of an image that looks something like “0e5574283393”. By default, an image is given the latest tag if it’s not provided explicitly. At last, we have to run the docker push command to push the tagged image to our newly created repository.

For the first time, it’ll take some time to build & deploy the image. Now, you can go to ECR, open the repository, and you’ll see the uploaded image. Let’s copy the image URL as we need it in our next steps.

5. Steps to create an ECS cluster

A VPC is created by default for a new account, so select the default VPC followed by subnets — select the first one from the drop-down, and the default security group. If we want to allow SSH to EC2 instances, we have to create a key pair and assign/select it while creating the cluster.

Task definition is a blueprint that describes how docker containers should launch which is similar to an AWS feature called Launch Configuration (an instance configuration template) except it is for a docker container. The definition contains settings like docker image, exposed port, CPU shares, memory requirement, the command to run, and environmental variables.

Whereas the task is a running container with these settings. We can think of it as an instance of a Task Definition and the container instance is just an EC2 instance that is part of an ECS Cluster that has docker and the ecs-agent running on it.

We’ll be using the image URL from AWS ECR while adding the container. The following video will show you the step-by-step process of creating a task definition:

6. Steps to create a Task Definition

If you’re creating the task definition for the first time, the Task execution role will be created by default.

We can define an ECS service as the long-running tasks of the same Task Definition. In other words, the ECS service enables us to run and maintain a specified number of instances simultaneously in an ECS cluster.

Let’s go through the video to know how to create a service and complete our final step:

7. Steps to create an ECS service

Once we create a service, go to clusters and check. There, you’ll see that one task has been created automatically and is in the running state under the Tasks tab with the latest task definition. However, if you want to create a task manually with the desired task definition, you can follow the below steps to do so:

8. Steps to create a Task

Try to keep the task memory below 1 GB as in the earlier step we’ve allocated around 1 GB to our ECS cluster. If we assign our task the same or more memory than our cluster, the task will fail to start with the below error: 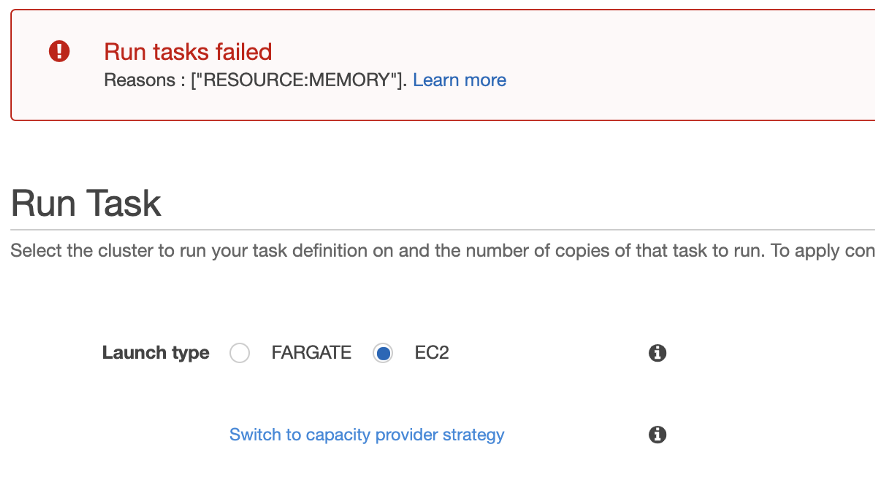 And that’s all we have to do to create and deploy the docker images on AWS ECS. 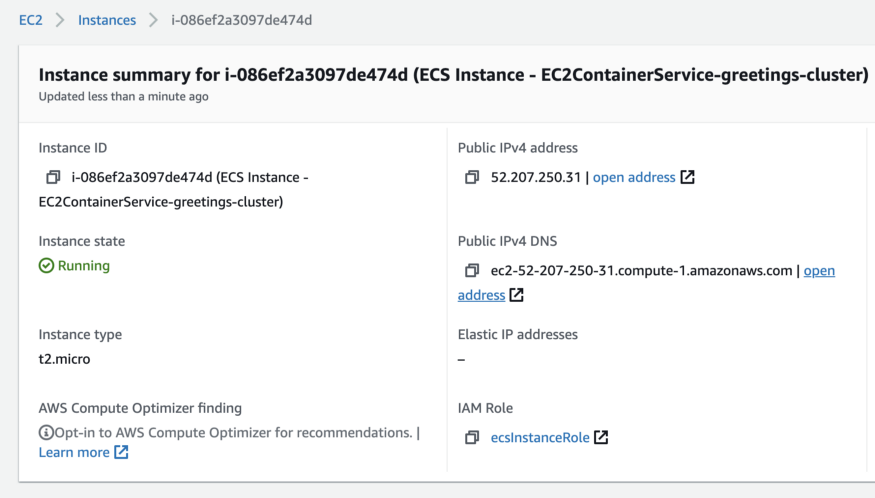 Wait, something’s not right! We’ve successfully followed all the steps but are still not able to access the address/service, it’s getting timed out. Don’t worry, it’s because of the security groups. A security group acts as a virtual firewall to control the incoming and outgoing traffic. If you remember from our earlier steps, we selected the default security group which includes an outbound rule that allows all outbound traffic only.

Let’s create a new security group and allow inbound traffic over ports 22 (SSH) and 80/8080 (HTTP). The following video will help you with the steps:

Once done, it should now be accessible over HTTP. Try hitting the same address and verify.

Congratulations! You have successfully set up your first ECS cluster and deployed a docker image on it.

We have already configured the logs to be handled by CloudWatch in Step-4. The following are the steps to access them:

This is it! Now we know all the steps, right from creating a docker image to deploying/running it on the top of a cluster of EC2 instances in AWS ECS.

There’s one more service/launch type called Fargate that you can choose and explore instead of the EC2 launch type. Fargate is a serverless compute engine for containers that can be used to eliminate the need to choose instances and scale cluster capacity. This makes it easy for us to focus on building our applications rather than choosing/setting up all the other things. Also, learn about the security best practices — AWS S3 Data in our blog here.

Will Cloud Technology Enable New Business Models to Emerge in 2022?